I met Judith Brust ten years ago. Upon introduction, she informed me that she was an artist. During the ensuing conversation, I asked her to describe her style. She said, “My work is about the life cycle; journey, religion and ritual, generational passage, and the map of life.” That had to be one of the best elevator pitches I have ever heard! I was immediately intrigued by her.

In watching this artist work, at first glance one might think she is simply playing with colors, “dinking” around with objects from nature and seeing what shapes magically appear on paper. Like so many artists whom I have observed, Judith, when working, shifts into a meditative state that is described by many as “the zone.” Some might refer to this “zone” as shifting from using the left (logical) side of the brain to the right (creative) side of the brain. Either way, the shift is obvious, and I believe (and agree with Judith) all creatives and artists are living examples of what visual communicators did dating back to the Middle or Upper Paleolithic era around 30,000 BCE and throughout the ages since.

Getting to know this artist over the years, I have found that her work is applauded by those from all walks of life. Her admirers are quite diverse—from widely-traveled collectors, to preppy summer residents, and from chic designers, rock stars, politicians, and bohemians, to salty wash-a-shores, and nature lovers alike. Individuals from culturally diverse backgrounds and often with widely varying senses of style who walked into Judith’s gallery on Nantucket shared similar aesthetics of her work. If the bold color and large size of her works didn’t grab and hold your attention, her mastery of combining contemporary layering print techniques with primitive motifs most certainly would have.

Mrs. Brust’s dedication to her work has won her esteem and recognition in both the United States and Asia, as well as in private collections, and at top juried shows. Judith also has the honor of having five of her works sold into the permanent collection at the Mandarin Hotel in Boston, alongside works of such well-known artists as David Hockney and Frank Stella.

Working in various mediums, Judith is best known for her sculptures and large-scale layered monoprints. Most of her work is created here on Nantucket. Samples of her work can be seen at The Gallery at 4 India Street and her complete works can be viewed at the artist’s studio just off Mononoy Road. 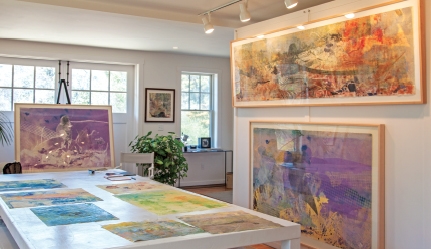 Meeting Judith Brust will leave a lasting impression. Her work may influence you in any number of ways, and it may also strike a primal cord in the most elegant way. I encourage you to make an appointment to meet with Judith and her agent at her studio. It will create an opportunity to invest in unique and inspirational art that will increase in value over time and bring stunning, beautiful work into your space.