The Spirit in Art, The Gallery at Four India 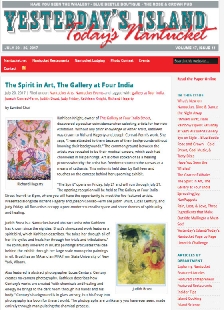 Kathleen Knight, owner of The Gallery at Four India Street, discovered a peculiar coincidence when selecting artists for her new exhibition. Without any prior knowledge of either artist, Kathleen was drawn to Richard Hagerty and Joseph Conrad-Ferm’s work. She says, “I was attracted to them because of their backgrounds without knowing their backgrounds.” The common ground between the artists was revealed to be their medical careers, which each had channeled in his paintings. Art is often spoken of as a healing process whereby the artist has freedom to turn to the canvas as a means of catharsis. This notion is held dear by Kathleen and touches on the concept behind her upcoming exhibit.

“The Spirit” opens on Friday, July 21 and will run through July 31. The opening reception will be held at The Gallery at Four India Street from 6 to 8 pm, where you will have the opportunity to meet the five featured artists. Presented alongside Richard Hagerty and Joseph Conrad-Ferm are Judith Brust, Lucas Century, and Judy Friday. All five artists occupy a post-modern surrealist space and share themes of spirituality and healing.